Practical Ways to Chill Colostrum
One way to reduce the frequency of scours among young calves is to feed clean colostrum. As a best management practice we want to feed colostrum before bacteria in it can multiply - a practical goal is within one-half hour after it is collected.
However,  many times we do not feed colostrum this quickly. Therefore, we are interested in chilling colostrum because the closer we get to 40F (compared to 100F out of the cow) any bacteria in the colostrum grow more slowly.
I took a picture of this dedicated colostrum chiller at a large dairy. Yes, it was custom made just for chilling colostrum. Works great but a bit on the expensive side. 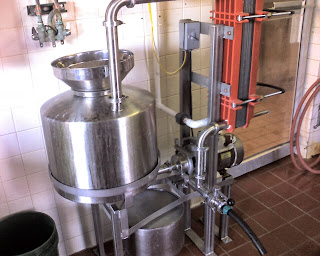 This farm chose to pour freshly-harvested colostrum into 2-quart pitchers purchased at Wal-Mart. The white ones shown in the picture were used for colostrum that tested the highest with a Colostrometer. Not shown are the blue pitchers used for the lower quality colostrum. As long as ice is floating in the water this method will chill colostrum from about 100F to 60F in 30 minutes. 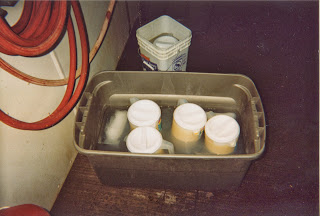 This farm chose to wash 1-gallon plastic jugs. They were filled with about 3.5 gallons of water and frozen. As colostrum was collected it was poured into clean 5-gallon pails (about 3 gallons) and a jug of ice added. When ice is added at the ratio of 1 part ice:4 parts colostrum the colostrum will chill from about 100F to 60F in 30 minutes. This dairy has several used refrigerators so this pail went directly into one of them after a lid was added.

Many dairies that use this method of "bottles-in-colostrum" choose to freeze 1 or 2-liter soft-drink bottles rather than 1-gallon jugs. As long as the 1:4 ratio of ice-to-colostrum is followed chilling to 60F within 30 minutes will happen. 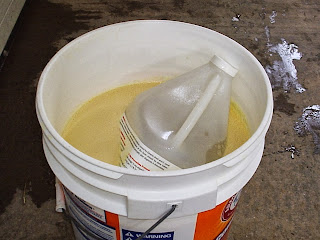 This dairy purchased a used ice machine at a restaurant auction. Using plastic tubs that were purchased in a size to fit into their second-hand refrigerator, they bottled off colostrum as it was collected. Bottles go into the tub, ice and some water are added and the whole tub goes into the refrigerator. There is a lid at the left in the picture so that tubs can be stacked if necessary.

Note the blue nitrile gloves over the nipples - after they test the colostrum for antibody concentration the bottles containing the lower quality colostrum get blue gloves and the higher quality ones get white gloves. 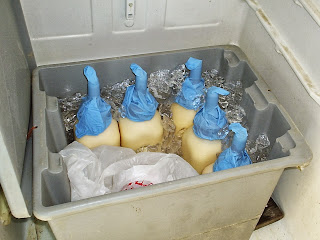